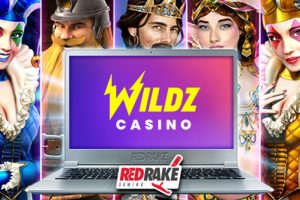 A recently signed partnership between Red Rake and Wildz owner Rootz has given the online casino access to the provider’s entire slots library.

As a result, Red Rake-developed hit titles such as Super12Stars, a feature and bonus rounds-packed slot, Tiger & Dragon, which features 1 million ways to win, and cluster slot Gustav Minebuster, which gives players the chance to win 20,000x, are now all live with Wildz.

Wildz was launched in the summer of 2019 as the first Rootz-owned online casino brand. Although it has been part of the highly competitive online gaming industry for just a few months, Wildz has grown rapidly and has increased significantly its offering in a bid to appeal to a wider gambling audience and cement itself in the space.

Shortly after the launch of its brand, Rootz obtained a B2C license from the Malta Gaming Authority. The online gambling operator is pursuing licenses from other regulators, as well, to extend its footprint in as many regulated iGaming markets as possible.

Rootz’s partnership with Red Rake was the latest of a series of such deals signed between the gambling operator and content providers. It emerged late last week that Wildz has also gone live with the entire library of Malta-based games developer Booming Games.

Commenting on the addition of a new client to their ever-growing network, Nick Barr, Managing Director for Red Rake’s Malta operations, said that they are thrilled to be working with the Wildz team and that “it’s incredible to see what they have achieved in such a short period of time.”

Mr. Barr went on that they are looking forward to being part of the online casino’s continued growth and delivery of an industry leading product.

Rootz Chief Operating Officer Tony Kjäldström said that they are pleased to join forces with Red Rake and to offer their entire slots portfolio at Wildz. The official went on that the provider “delivers quality titles that will be a welcome addition to our casino in particular.”

Mr. Kjäldström also noted Red Rake’s replay feature “will be sure to generate interest, especially among seasoned casino players” and that “more important than these extra features is the overall quality of the games [which] Red Rake Gaming absolutely delivers.”