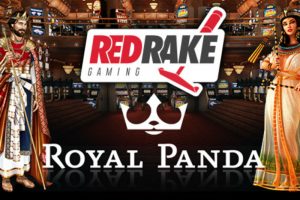 Red Rake Gaming has taken its entire slots portfolio live with online casino brand Royal Panda in the latest of a series of supply deals penned by the content provider as part of its growth strategy.

The recently signed partnership has seen Royal Panda gain access to Red Rake’s entire collection of slots, including top performers such as Super12Stars, Tiger and Dragon, and Gustav Minebuster as well as newer releases such as Solomon: The King.

Red Rake’s Super12Stars has been making waves in the iGaming space with its action-packed gameplay and multiple features and bonus round. The provider’s Tiger and Dragon slot offers players 1 million ways to win while its cluster slot Gustav Minebuster offers slots enthusiasts the chance to win 20,000x their initial stake.

Red Rake is one of the most rapidly growing developers and providers of content for the iGaming industry. The company initially operated from Spain, but last year opened an office in Malta and obtained a license from the local gambling regulator – the Malta Gaming Authority, to better position itself for continued growth.

News about Red Rake’s partnership emerge shortly after the company announced an alliance with online gambling operator Premier Gaming. Under that deal, Red Rake has agreed to roll out its content across the operator’s brands.

Commenting on their partnership with Royal Panda, Red Rake Gaming Malta Managing Director Nick Barr said that they are thrilled to team up with the operator as they continue to grow their market reach across the globe “at an incredible rate.”

Mr. Barr went on that they “could not be happier to have another well-renowned brand onboard” and that they look forward to a fruitful partnership.

Royal Panda was founded in 2014 and was acquired by the LeoVegas Group in 2017. The iGaming brand boasts a significant base of loyal players in a number of markets.

Of the deal, Melvin Ritsema, Managing Director at Royal Panda, said that they are very happy to “get all of Red Rake’s content live on Royal Panda’s casino.”

The casino official also pointed out that Red Rake’s games, including the newly released but already quite popular slot Solomon: The King, “are unique and really stand out from the other slots in our casino.”

Earlier this month, Red Rake celebrated another important milestone – its entry into a new regulated market. The iGaming supplier was able to introduce its content to gambling customers from Belarus where lawmakers reorganized the local gaming space and introduced a new regulatory framework in 2019.