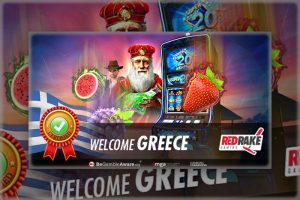 Greece had been a strong market for Red Rake prior to its reorganization as the company had worked with some of the largest operators in that market.

The supplier will now be able to return to the Greek space with a recently obtained license from the local regulator, the Hellenic Gaming Commission. The company was granted an A2 license that enables it to continue to deliver its products to locally licensed online operators and continue to expand its footprint there through future partnerships with more operators.

After securing the required regulatory approval, Red Rake is now gearing preparations to roll out a wide selection of its top performing online slots to Greece-licensed operators.

The innovative provider’s hugely popular Super Series will be among the titles that will be made available in the Greek market. The suite includes recent release Super 20 Stars, an action-packed game that incorporates all feature games and bonus rounds from all earlier titles in the series while also adding a brand new dimension to “an already proven high performing game genre.”

Other slots that will soon go live in Greece include Alchemy Ways, which gives players one million ways to win, Max Dangerous and the Lost Relics, Tommy Gun’s Vendetta and Flamingo Paradise.

Red Rake said that it would continue to build and expand its Greece-focused portfolio by adopting a localized approach with local players “firmly in mind throughout the development process.”

The supplier’s recently secured Greek market entry follows on from numerous earlier market debuts over the past several months and represents yet another opportunity for the company to further its international footprint.

Commenting on their latest big news, Red Rake Gaming Malta Nick Barr said that Greece has always been a very strong territory for their content, “demonstrated through our extensive client portfolio in the market.”

Mr. Barr went on to note that they have more exciting markets lined up for the fourth quarter of the year and the first quarter of 2022 and that they are looking forward to continuing their strong performance in Greece and delivering the best experience to Greek players.

A few weeks ago, Red Rake also revealed that it would expand into Argentina’s regulated online gambling space through a deal with Betfun, the online gaming brand of Argentinian gambling firm Hipódromo de Palermo.

Betfun is powered by a cutting-edge mobile-focused platform and is licensed by licensed by Lotería de la Ciudad de Buenos Aires (LOTBA), the gambling regulator of the City of Buenos Aires.