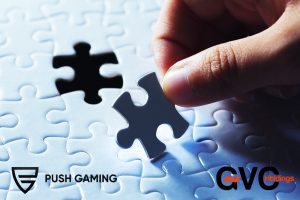 Online casino games supplier Push Gaming has partnered up with major gambling group GVC Holdings to supply its games to the operator’s brands.

The integration of Push Gaming titles will happen in several phases. The first phase will see GVC’s online gaming brands, including Ladbrokes, Coral, and bwin, go live with a selection of titles from the developer’s ever-growing portfolio.

The remainder of games will be rolled out in the coming months. This means that players across GVC’s brands will gain access to hit Push Gaming titles such as Jammin’ Jars, Razor Shark, The Shadow Order, and Immortal Guild, among others.

The integration of content will happen via the supplier’s proprietary gaming platform.

The deal with GVC is the latest major partnership announced by Push Gaming as the company is transitioning from a boutique game developer to a full-service supplier of products for the online gaming industry.

As part of its evolution, Push Gaming recently debuted a new logo. The company says that it is part of its growth strategy to foster innovations across the key features of its own iGaming platform and harness new in-game mechanics for better player acquisition and retention.

Push Gaming CEO James Marshall said that they are pleased to be teaming up with GVC and to be providing their games to players at “some of the most popular and successful online gambling brands in the world.”

Mr. Marshall went on that their content has proved to be a big hit with a wide range of online casino players and that they “look forward to entertaining and exciting GVC’s customers.”

Push Gaming has offices in London and Malta. Earlier this year, the company obtained a Game Host license from the UK Gambling Commission and a B2B license from the Malta Gaming Authority for its proprietary iGaming platform.

The supplier said that the licenses were an important milestone in its transition and its strategy to implement innovation by combining “great graphics, intelligent maths and state of the art game mechanics.”

Push Gaming plans to roll out a plethora of new gaming titles this year, in addition to platform-level innovations, following the recent acquisition of Game Server Integrations (GSI).

Last month, Push Gaming announced a partnership with Boom Casino, a newly launched brand that is part of the Hero Gaming online casino group. The partnership included an exclusive promotional bonus campaign offering a bonus round on Push Gaming’s hugely popular Jammin’ Jars title and aimed to spread the word about the new online gaming operation.