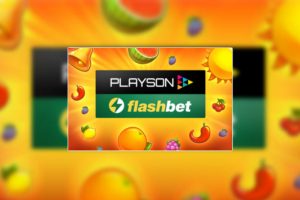 Provider of content for the online gaming industry Playson has partnered gambling operator FlashBet in a move that will significantly expand the content supplier’s presence in the lucrative Italian iGaming space.

Under its recently inked content supply deal with FlashBet, Playson would provide the operator with access to its entire slots collection that expands constantly.

FlashBet is an Italy-facing online gambling operator that is part of P.G.S. Italia srl. The group recently obtained a license for the provision of online gambling services from Italy’s regulator Agenzia delle dogane e dei Monopoli.

The agreement between the provider and the operator would see Playson supply its range of online slot titles, including hit games Rome: Caesar’s Glory, Solar Queen, the Timeless Fruit Slots series, and Funky Fruits. The content supplier will thus significantly grow its Italian foothold and gain access to a wider gambling audience.

Playson’s partnership with FlashBet was the latest to have been announced by the content provider in recent months. In February, the company partnered up with 888casino, the gaming brand of online gambling powerhouse 888 Holdings.

Under that recent deal, Playson would gradually roll out its content with 888casino in a number of European markets, including Sweden, Spain, Denmark, Italy, Romania, the UK, and Gibraltar territories.

Of their partnership with FlashBet, Playson Business Development Manager Lars Kollind said that the Italian market is a very exciting one and that they are delighted to team up with FlashBet.

The official added that global expansion is a high priority for his company and that they look forward to reaching “an even greater Italian audience” with their content portfolio.

Florion Bregasi, CEO of P.G.S. Italia srl and Founder of FlashBet, said that “Playson’s slots are immensely popular and we’re thrilled to have partnered with them and offer its games to our customers.”

As mentioned earlier, Playson considers Italy an important market for the implementation of its growth strategy. The company made its first foray into the lucrative Italian iGaming space in the spring of 2017 when it announced a supply deal with Italian gambling operator Microgame.

Since then, Playson has teamed up with several more locally licensed operators to further strengthen its Italian foothold. Last summer, the provider announced a partnership with Betflag. The deal saw Playson roll out a selection of its content with the gambling operator.

The content provider has also secured entry into the Romanian and Swedish online gambling markets over the past year as part of its strategy to grow its presence across multiple regulated European markets.