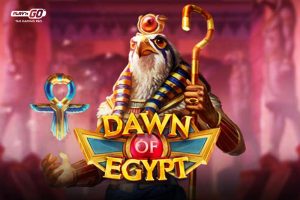 Prepare to be transported all the way back to the dawn of Egypt with the latest addition to the ever-growing portfolio of Play’n GO.

The software developer’s new Dawn of Egypt title is just as colorful, exciting, and Ancient Egypt-y as its other recently released Ancient Egypt-themed game Legacy of Dead.

Dawn of Egypt was rolled out across Play’n GO’s network of operator partners on February 20. The game arrived with 5 reels, 3 rows, and 10 paylines. The title boasts high volatility and 100,000 max win exposure.

Play’n GO’s latest release features a plethora of symbols based on the game’s theme and some of them are powerful enough to help players scoop a share of mighty Ra’s riches. The low paying symbols are represented by the card royals J-A. Symbols of the Egyptian civilization such as the lotus, symbolizing creation, the ankh, the symbol of life, a scorpion, and a snake, both being sacred animals in Egypt’s folklore, come next on the paytable.

Sekhmet, the warrior goddess, and all-powerful Ra serve as the game’s premiums. Ra gives players 100x their bet for a winning combo of five of a kind.

A beautifully embellished Scarab Beetle acts as the wild and substitutes for all other symbols in the game except the scatter.

Players need at least three matching symbols across the game’s paylines to pick up a win.

Once the feature is unlocked, the Wheel of God appears on the screen to spin and determine the number of free spins a player will receive. Players can get up to 15 free spins.

For every free spin, a random picture symbol is transformed into a more powerful symbol for bigger wins. It should also be noted that during the Free Spins mode, the Pyramid scatter is transformed into a Wild Pyramid that substitutes for all symbols on the reels, but has one more important function.

During Pyramid Spins, picture symbols still get upgraded, but also remain in their upgraded form throughout the feature. Two or more scatters during the feature retrigger it, which creates the possibility of unlimited retriggers.

Commenting on their latest slot adventure, Play’n GO CEO Johan Törnqvist said that “we have already given the market a lot of variety so far this year, and that will continue, but you also have to give your audience things they want, as well as showing them something new, it’s a delicate balance and one which we respect in our plans.”