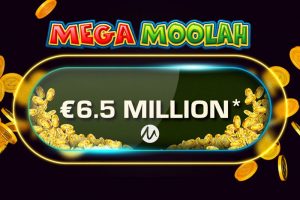 This is the fifth seven- or eight-figure win hit on the provider’s progressive jackpot network this year and the hundredth one in its history.

On June 4, a player playing the classic Mega Moolah slot at Optibet.com struck the whopping prize of €6,597,136.10 to become part of Microgaming’s history as its latest millionaire.

The latest gigantic win on Mega Moolah came just weeks after the iconic progressive jackpot network paid out the record-breaking amount of €19.4 million on Absolootly Mad: Mega Moolah, an online slot that joined said network in the spring of 2020.

Commenting on the latest big Mega Moolah prize, Microgaming CEO John Coleman said that he is delighted to see another big jackpot win so soon after Mega Moolah dropped for €19.4 million a couple of months ago.

Mr. Coleman also extended his congratulations to Optibet and its player for “this brilliant win” and noted that this is “something of a milestone for Microgaming, being the 100th euro millionaire made on our progressive jackpot network.”

Optibet CPO Chris Davis said that they were thrilled to hear the news that one of their customers had struck Mega Moolah’s Mega jackpot. He also pointed out that “not only was it the first Mega jackpot to be hit at Optibet.com, but it’s also a tremendous multi-million-euro prize.”

As pointed out earlier, this is the latest prize of seven or eight figures awarded by Mega Moolah since the beginning of the year. Including this most recent win, Microgaming’s progressive jackpot network has paid out more than €1.4 billion since its launch around 15 years ago.

It should also be noted that the network has awarded over €103 million across all its jackpots, tiers, and games so far this year.

All wins on Mega Moolah are paid in a lump sum and the latest one is no exception.

In late April, Mega Moolah bettered its own record for the biggest prize ever awarded on an online slot after a player from Belgium landed a €19.4 million win playing Absolootly Mad: Mega Moolah at Napoleon Sports & Casino, a leading online gambling platform in the regulated Belgian market.

Other big Mega Moolah wins landed over the past year include an August 2020 one that saw a Swedish player trigger a €14.2 million prize while playing the hugely popular online slot at LuckyCasino, an online gambling venue launched in 2015 to become one of the first to adopt Trustly’s Pay N Play product and enable its players to start playing right away with a single quick deposit from their bank account.