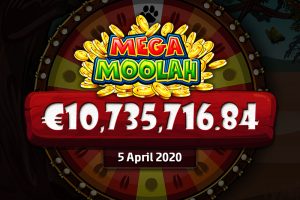 The player will receive their prize in a lump sum as it is with all wins on Microgaming’s progressive jackpot network, which is the largest in the online gambling industry.

Microgaming’s Mega Moolah game is arguably the most popular progressive jackpot slot in the industry. The slot’s jackpot actually includes four progressive jackpots in one – Mini, Minor, Major, and Mega. The Mega Jackpot is the one that everyone is particularly excited about. It seeds at 1 million in whichever currency a player plays the game.

Mega Moolah’s average jackpot win sits at the whopping €5.4 million, which really explains why the game has turned into a blockbuster. It should also be noted that Mega Moolah holds the record for the largest progressive jackpot ever won.

Microgaming’s progressive jackpot network has a number of extremely popular titles with a huge player base, but the provider has never stopped adding more games to it.

Since the beginning of the year, the company has added two new progressive jackpot slots, with those being Atlantean Treasures Mega Moolah by Neon Valley Studios and Wheel of Wishes by Alchemy Gaming. The latter slot game features Microgaming’s recently revamped and upgraded WowPot jackpot.

The provider’s 2020 roadmap includes the introduction of more progressive jackpot games throughout the year, alongside regular slots. One such new release is the upcoming Absolootly Mad Mega Moolah, which is set to be made available across Microgaming’s network of clients on May 5.

Of the recent eight-figure Mega Moolah win scooped by a Jackpot City player, Microgaming’s Chief Operating Officer, Andrew Clucas, said that they are thrilled for the victorious slots enthusiast and that Mega Moolah continues to be “a favorite among players worldwide, and so we are excited to be adding more new progressive games to the jackpot and network throughout the year.”