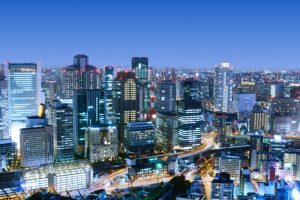 A consortium formed by Las Vegas casino giant MGM Resorts International and Japanese financial services group Orix Corp. has remained the sole candidate deemed suitable to bid for a license to develop and operate an integrated resort with a dedicated casino facility in Osaka.

The announcement was delivered by the Osaka prefectural government on Friday, the last day for interested parties to submit their bids to participate in a request-for-proposals process that was launched in November 2019.

Prefectural officials said Friday that the MGM-Orix consortium was the only qualified applicant to have participated in the process. It is believed that Osaka prefecture and city lawmakers will announce their decision on whether they would partner MGM and Orix to bid jointly for one of three casino licenses up for grabs from the central government by mid-2020.

Three private companies were announced in November as the ones to have remained interested in building and running an integrated casino resort in Osaka. These were MGM and its local partner, the Japanese unit of Macau casino operator Galaxy Entertainment Group, and Genting Singapore, a subsidiary of Malaysian casino resort operator Genting Group.

Osaka officials have announced that if the city wins the right to host one of Japan’s first integrated resorts with casinos, the property will be developed on a 49-hectare site on the man-made Yumeshima island in Osaka Bay.

Osaka prefectural and city lawmakers are looking to move forward with their casino plans, despite the massive bribery scandal that hit Japan late last year.

Tsukasa Akimoto, the lawmaker who oversaw the drafting of the policy that would introduce casino-style gambling in the country, was arrested in December on suspicion that he took bribes from Chinese gambling firm 500.com to spearhead its bid to build a license in Hokkaido.

Mr. Akimoto was indicted on bribery charges and was released on bail earlier this week. He has maintained his innocence.

The piece of legislation is now expected to be released at some point this month.

Up until this summer, Osaka was considered among the front-runners in the casino race and multiple international casino companies had their sights set namely on the city. However, since Yokohama entered the race in August, many of the those operators focused their efforts on winning the right to build an integrated casino resort in that city.

Las Vegas Sands, Melco Resorts & Entertainment, and Wynn Resorts were among the companies to assert their commitment to running luxury properties in Yokohama, known to be Japan’s second largest city by population.