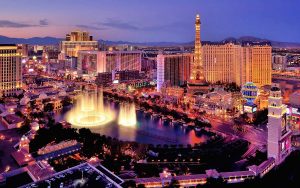 The Mayor of Las Vegas has pushed back against the statewide 30-day closure of casinos and other non-essential businesses as part of the measures invoked by Gov. Steve Sisolak to arrest the spread of the deadly coronavirus.

Las Vegas Mayor Carolyn Goodman said that her city should be allowed to keep dining, entertainment, casino, and sports betting facilities open as its economy depends heavily on tourism and on the 40 million people that visit the city and the above facilities every year.

Mayor Goodman, who serves her third term, said Friday during a speech before the Las Vegas City Council that she believes Gov. Sisolak should cut the length of the statewide closures in half as “we […] cannot survive any total shutdown of the economy … beyond the immediate week or two.”

Las Vegas’ top official also pointed out that “very many” people among the 2.2 million who live in and around Las Vegas “live paycheck to paycheck” and are heavily reliant on casinos and other businesses that were ordered to close in the face of the global Covid-19 crisis.

The tally of coronavirus cases has reached 154 in Nevada with two reported deaths. Almost all of the patients who have tested positive for the highly contagious virus are in the Las Vegas area.

Gov. Sisolak responded strongly to Mayor Goodman on Friday, saying that “your life and the life of your neighbors and family members will always be more valuable to me than the perceived and mistaken economic gain we have by cutting this isolation period short or by waiting one more day to get serious.”

The state’s top official went on that he was no longer asking Las Vegas businesses to close but was rather “telling them they must close their doors or they will face the consequences.”

Gov. Sisolak urged elected officials across Nevada to “understand the severity of the situation they are facing and become part of the solution.”

The American Gaming Association estimates that the 30-day shutdown of Nevada’s 219 commercial casinos would result in $4.7 billion in lost economic activity. The closure of the gambling venues has seen more than 205,000 employees be idled statewide.

While some casino operators said they would pay employees during the period of closure, others indicated that there would be furloughs and layoffs.

Not all elected officials across Nevada have protested Gov. Sisolak’s strict measures against the spread of the coronavirus. Reno Mayor Hillary Schieve called for a 30-day closure of non-essential businesses even before Gov. Sisolak ordered the statewide shutdown.