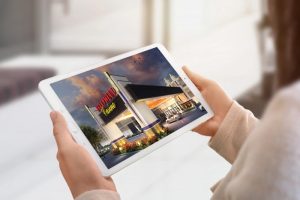 Hollywood Casino Baton Rouge on Tuesday broke ground on a multi-million dollar project that will see the riverboat operation move onto dry land sometime next year.

The casino is the first in Baton Rouge to take advantage of a 2018 law allowing Indiana’s riverboat casinos to relocate on land.

The relocation project kicked off with a starting budget of $60 million, up significantly from the $21-25 million investment previously announced by property owner Gaming and Leisure Properties, Inc. (GLPI).

Hollywood Casino Marketing Vice President Aaron Mollura said during Tuesday’s groundbreaking ceremony that the riverboat gambling venue has been part of the area’s casino scene for 25 years and that “going land-based was something we thought would enhance the product, make it better.”

Mr. Mollura went on to note that they are definitely looking forward to adding some new business. In addition to moving to land, Hollywood Casino will also modernize its offering to improve the experience for its customers at almost all levels.

Now as construction is underway, GLPI will transform the parking lot located right next to the existing Hollywood Casino into a land-based gaming and entertainment complex. The future property will occupy 100,000 square feet of land. The single-level casino floor alone will spread over 27,000 square feet.

The gaming facility will feature the existing riverboat casino’s 859 slot machines and 12 table games as well as a sportsbook.

Offering All Entertainment on One Floor

The new land-based casino will also feature new dining options, including a Shaquille O’Neal Big Chicken Restaurant. It will replace Hollywood Casino’s existing Celebrity Grill. Of their new restaurant, Mr. Mollura said that “that’s what most of our guests are asking, they want to see a celebrity start walking around the property.”

The relocated Hollywood Casino will further include a big sports bar to complement the planned sportsbook.

Louisiana was one of several states to approve sports betting during last November’s election. It is still unknown when athletic gambling will kick off in the state, but hopes are that this will happen by Super Bowl early next year.

When the relocated Hollywood Casino opens doors, all its offering will be on a single floor. Mr. Mollura said that the current riverboat is three stories tall and that “means up and down a lot of stairs, land-based is one floor, a lot easier getting in and out and obviously with a boat you’re very constricted to the space you can use.”

Once the relocation is complete, the vessel will be sold and Viking river cruises will be making stops at the original deck, Mr. Mollura also noted.

Construction work is projected to wrap up in about a year from now and the new land-based Hollywood Casino is expected to open doors in late 2022.