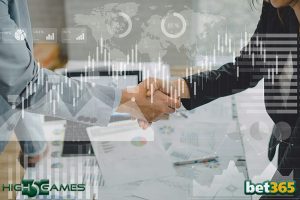 Independent casino games provider High 5 Games today revealed a major partnership that would significantly expand its foothold across important markets and would provide a wider gambling audience with access to its content portfolio.

The New York-based studio has partnered with online gambling powerhouse bet365 to provide its huge global customer base with access to its entire games library.

Through this partnership, bet365 will further enhance its existing offering with popular slots such as Triple Double Da Vinci Diamond, Goldstruck, and Way Out Wilds, all produced by High 5 Games.

Games by the developer will be made available to the gambling operator’s customers across the globe, including European markets and the United States. High 5 Games’ deal with bet365 will thus enhance significantly its international presence.

Established in 1995, High 5 Games has grown to become one of the largest, if not the largest, independent providers of games for the land-based, digital, and social casino industries. Its content is available across six continents and in more than 150 countries.

High 5 Games’ library currently includes more than 450 games. Through its remote game server, High 5 VAULT, its selection of titles can be integrated with multiple online casinos for real money play.

To ensure that it is a truly global operation, High 5 Games has obtained licenses and certifications from a number of reputable regulators, including the UK Gambling Commission, the New Jersey Division of Gaming Enforcement, the Gibraltar Regulatory Authority, the Malta Gaming Authority, and the Danish Gambling Authority.

As part of its content supply deal with bet365, High 5 Games will additionally provide the gambling operator with dedicated account management support from the supplier’s Maltese team following the opening of its new office in Sliema.

High 5 Games noted that its recently inked partnership with bet365 demonstrates the growing appeal of the provider’s desktop and mobile gaming content as it has gone live with a number of tier-one companies.

Commenting on their latest important milestone, High 5 Games CEO Anthony Singer said that they have been working with the bet365 team for more than five years and that they are thrilled to have secured a new global agreement that would take the provider and the operator’s partnership to the next level.

Mr. Singer went on that integrating their games directly with bet365 would prove highly beneficial for the operator as it would be able to launch the titles more efficiently.

High 5 Games is expected to deliver its new content to the gambling operator in the coming months.

Last month, the New York-based studio entered a multi-year deal with Iforium. Under that agreement, High 5 Games would integrate its library onto its partner’s Gameflex content aggregator that already contains more than 9,000 titles from over 100 providers.