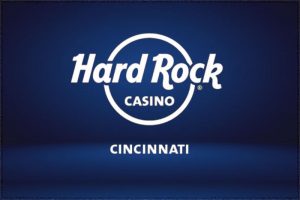 The former JACK Cincinnati Casino is gearing up preparations to celebrate its grand opening as Hard Rock Casino Cincinnati next week.

Casino management held a special press tour on Wednesday to preview the rebranded property and what it will offer to patrons when it swings its doors open on July 15.

The revamped property, located on a 22-acre site in the Broadway Commons area in downtown Cincinnati, is now complete with rock’n’roll murals and memorabilia, fundamental attributes of the Hard Rock brand. Items include the iconic bedazzled black jumpsuits worn by members of the legendary band KISS and stage costumes worn by Devo, the popular rock band hailing from Ohio.

The July 15 Hard Rock Cincinnati grand opening ceremony will mark the 50th anniversary of the Hard Rock brand. Celebrations will include a live performance by Cincinnati rock band Blessid Union of Souls.

Mr. Taliaferro went on to say that when patrons visit Hard Rock Cincinnati, “they can come knowing that they’re seeing authentic pieces from some of their very favorite artists throughout the course of music history.”

Phase One to Be Unveiled in Mid-July

Hard Rock began phase one of a rebranding and revamp effort at the casino shortly after the acquisition deal was finalized. However, the coronavirus outbreak and multiple state-mandated restrictions aiming to curb it significantly slowed the process.

When the heavier restrictions were lifted in February, the rebranding initiative resumed in earnest. Hard Rock unveiled a Rock Shop at the Cincinnati property in April. A Hard Rock Cafe with a stage for live events is set to open doors in the coming few days.

COVID-19 forced Hard Rock to pause some projects at the gambling venue, including work on a hotel. Property officials said earlier this year that they still had plans to add a Hard Rock Hotel but first wanted to get through phase one of the rebranding.

They also noted that they were in the process of researching what type of a hotel would match the needs of their property and the Cincinnati market in terms of size and amenities, among other things.