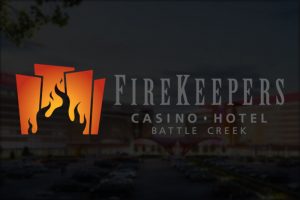 FireKeepers Casino Hotel in Battle Creek, Michigan is set to unveil its new hotel expansion with a true spectacle this coming Monday, August 16.

The casino complex, located about 100 miles away from metro Detroit, has tapped tightrope daredevil Nik Wallenda to perform a gravity-defying stunt and celebrate the opening of a new 203-room hotel to complement the property’s existing amenities.

Wallenda, a Guinness World Record holder and a seventh-generation member of the world-famous performing family the Flying Wallendas, will walk a tightrope 200 feet above the ground between the resort’s existing hotel tower and the new one. According to a recently published press release, the King of the High Wire, a title Wallenda has earned long ago, will walk a span of more than 400 feet between the two buildings.

Spectators are invited to view the stunt at the casino. FireKeepers, which is owned and operated by the Nottawaseppi Huron Band of the Potawatomi, will also stream the unique event on its Facebook page and YouTube channel.

Property CEO Kathy George said that “as exciting as this event will be, we don’t want anyone missing out” and that they are “thrilled to welcome Nik Wallenda” as they cannot think of a better way to celebrate their “moving forward than with his aerial adventure across our towers.”

FireKeepers broke ground on its new hotel tower in the summer of 2019. Property officials said at the time that the hotel and casino complex needed more rooms as occupancy was always at really high percentiles – “in the high 90s at all times every days” – and they often had to “turn away a lot of valued patrons.”

The casino first opened doors in 2009 without a hotel. Its first hotel tower became operational in 2012 with 243 rooms.

As mentioned above, the new accommodation facility will feature 203 rooms, bringing the property’s total to 446.

JCJ Architecture of Hartford, Connecticut and Clark Construction Co. of Lansing were hired to handle the expansion’s design and construction. The new tower will boast a 39,000-square-foot ground level that will feature a new lobby bar, front desk, and a café.

The casino will also unveil a new luxury high-limit gaming area and a VIP lounge on Monday. FireKeepers’ signature fine-dining restaurant, Nibi, will be relocated to the new hotel from its old spot on the gaming floor. The restaurant will now feature seating for 125 people, a new fire feature, expanded wine storage, and an area for small private parties and meetings of up to 20 people.

Property officials have not provided financial details on the expansion.