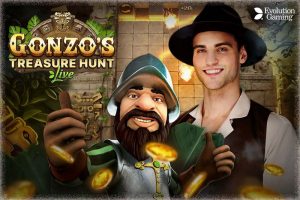 Live casino specialist Evolution on Wednesday morning debuted Gonzo’s Treasure Hunt, its latest live game show product and a game of many firsts for the company and the online casino industry as a whole.

Gonzo’s Treasure Hunt is the world’s first live casino game that blends together live and online slots-style gameplay as well as the first one to offer players the option to play in Virtual Reality (VR) mode with a VR headset and controller.

As its name suggests, Evolution’s newest release is inspired by NetEnt’s iconic online slot Gonzo’s Quest. Gonzo’s Treasure Hunt features Gonzo, the world-famous explorer, who has embarked on a new search for riches.

The new game is the first Evolution product to use intellectual property from NetEnt after the former company acquired the latter late last year in a $2.2 billion deal.

As mentioned above, Gonzo’s Treasure Hunt is the latest addition to Evolution’s rapidly growing portfolio of live game shows. The new title blends the worlds of live casino and online slots to mark a “whole new direction” in the creation of this type of content.

Central to the newly released game is the search for riches in a giant wall of 70 stones. As noted by Evolution, a standout feature in this latest installment of Gonzo’s escapades is when the legendary explorer “comes alive” as an augmented reality character and joins the live show hosts at Evolution’s studios as well as the players in the treasure hunt.

One more innovation that the game introduces to the market for the first time is the option for players to play it in VR mode using the necessary equipment. This option makes the experience offered by the title even more immersive.

Commenting on their newest release, Todd Haushalter, Evolution’s Chief Product Officer, said that this is their first product to combine the best of NetEnt and Evolution following the two companies’ recent tie-up.

The official went on that he has been excited to work with NetEnt’s “amazing” intellectual property since the online slot specialist became part of the Evolution family and that they are now starting by “taking the most famous character in slots and bringing him to live casino.”

Mr. Haushalter further noted that this is the first live game to give players “such a high degree of control over their game strategy and the potential outcome” and that “unlike other games where the result is the result and there is nothing you can do about it, in Gonzo’s Treasure Hunt™ players take control as they go hunting for their prizes.”

The Evolution CPO also pointed out that the launch of this game shows the whole new direction the company is taking when it comes to its game show range as they want to widen the definition of what a game show is and that giving players a whole new level of control over gameplay will certainly attract a new audience to Evolution’s products.