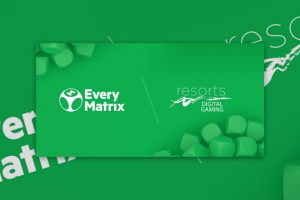 Online gambling software company EveryMatrix has made a further in a series of recent moves geared toward its US expansion strategy.

The company announced Wednesday that it has teamed up with New Jersey-focused operator Resorts Digital Gaming to supply it with proprietary online casino content from its in-house game development studios.

As part of this recent partnership, EveryMatrix will provide its new operator partner with access to high-quality original games from its own Spearhead Studios and Armadillo Studios.

EveryMatrix launched Spearhead Studios in the fall of 2019 to mark its first foray into the game development segment. The developer is based in Spain and has quickly built a portfolio of innovative online slots and classic casino games with its own twist.

As for Armadillo Studios, it was created earlier this year as EveryMatrix’s first US-based and focused game development investment. The studio is based in the group’s US headquarters in Miami, Florida.

EveryMatrix said that it has agreed with Resorts Digital that they partnership will kick off in New Jersey, with plans for the agreement to be extended across multiple other states and the operator to deploy content from the provider’s in-house studios in those other states as they regulate.

Commenting on their latest important announcement, Erik Nyman, EveryMatrix President Americas, said that they have come a long way since they first decided to venture into “the most significant gambling market in the world” and that he is pleased to announce this new distribution deal in the US.

Mr. Nyman went on to note that their partnership with Resorts Digital will enable them to make their games available with the operator with an option for further content to be added as it becomes available through EveryMatrix’s CasinoEngine.

Resorts Digital Gaming CEO Ed Andrewes added that his company already has a “market-leading portfolio of slot and table games” and that they are “absolutely delighted” to integrate and roll out EveryMatrix’s content in the US.

Mr. Andrewes further pointed out that their new partner has already proved that “its games are very successful” across other iGaming markets and that he believes they will perform equally well with their New Jersey-facing brands.

New Jersey is the first US market EveryMatrix has made strides to enter as part of its US expansion effort. The company applied for a license with the local regulator, the New Jersey Division of Gaming Enforcement, last fall.

News about the software provider’s partnership with Resorts Digital emerge days after it announced a similar US-focused content supply deal with Kindred Group.