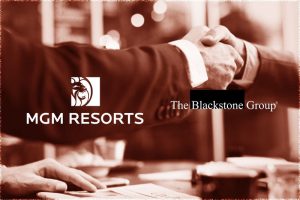 Blackstone will lease the resorts back to MGM for an initial annual rent of $215 million, it also became known. Both transactions are expected to close by the end of this quarter.

MGM further announced Thursday that it is set to buy out the remaining 50% stake in its CityCenter joint venture from a unit of its partner, investment firm Dubai World for $2.12 billion. CityCenter is a sprawling, 67-acre complex in the heart of the Las Vegas Strip that comprises the Aria and Vdara resorts, among other properties.

The recently initiated transactions are part of the casino powerhouse’s “asset light” strategy that involves shedding properties to generate cash and use it for endeavors with big growth potential, including sports betting and an integrated casino resort in Japan.

MGM President and CEO said Thursday that CityCenter has “consistently elevated the Las Vegas experience” and that the deal with Blackstone “demonstrates the unprecedented premium value of our real estate assets.”

The executive further noted that they plan to use the proceeds from the transactions to “enhance our financial flexibility and secure new growth opportunities” and that the money could go toward enhancing MGM’s online casino and mobile betting product as well as toward upgrading other company properties.

Blackstone has aggressively been pursuing expansion in Las Vegas over the past decade, and particularly in recent years, scooping premium Strip properties.

It should be noted that this is not the first time MGM and the private equity firm enter into a multi-billion-dollar sale-leaseback deal.

In the fall of 2019, MGM sold its iconic Bellagio property to Blackstone for $4.2 billion. The New York-back financial services group then leased back the luxury resort to its former owner for an initial rent of $245 million a year.

MGM said at the time that the sale would help it “build a fortress balance sheet and return capital to shareholders.”

Just a couple of months later, MGM’s real estate investment trust, MGM Growth Properties, entered into a definitive agreement with Blackstone Real Estate Income Trust, an entity of Blackstone, to form a joint venture and acquire the real estate assets of MGM Grand and Mandalay Bay for a total of $4.6 billion.

The joint venture then leased the hotel and casino resorts to MGM for an initial rent of $292 million.

Once MGM closes the Vdara and Aria sale as well as a previously announced sale of its MGM Springfield property to MGM Growth Properties, the company will operate all of its resorts around the US but will not own them.

Blackstone also owns The Cosmopolitan of Las Vegas, which it purchased in 2014 in a $1.73 billion deal.

Source: MGM Resorts selling Aria, Vdara for nearly $4B and leasing them back, The Las Vegas Review-Journal, July 1, 2021