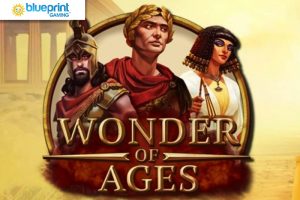 Slots enthusiasts can now bask in legends, myths, and stories about some of the greatest ancient civilizations this world has seen, some of the most clever and powerful rulers, and dignitaries from different cultures with Blueprint Gaming’s newest slot, Wonder of Ages.

The game is set against the backdrop of the Egyptian pyramids and features five reels, three rows, and 20 paylines.

Most importantly, Wonder of Ages is connected to Blueprint’s Jackpot King Deluxe progressive jackpot system and offers players the chance to win cash prizes on one of three progressive pots upon any spin and off any stake.

A quick look at the game shows that its symbols include the Roman numerals as the lower paying symbols and some of the greatest ancient leaders, including Cleopatra – one of most powerful women in history, as the higher paying symbols.

If a player lands the slot’s main characters on a winline during base game, they are awarded a win multiplier of x200.

When three or more scatters hit the reels, players gain access to the bonus picker. They need to match three coins to be awarded entry into one of four free spins games, each based around the greatest ancient civilizations.

At the end of each free spins round, players can again secure access to another such round through the bonus picker.

Wonder of Ages is a medium to high volatility slot that is supported across desktop as well as iOS and Android devices.

Supported jurisdictions include the UK, Malta, Gibraltar, Isle of Man, and Alderney, which means that the game is set to soon be rolled out across multiple markets and with multiple online casino operators.

Wonder of Ages is available in 15 different languages and supports a number of currencies.

Commenting on the addition of yet another exciting title to their existing offering, Blueprint Gaming Director of Marketing and Relationships Jo Purvis said that their newest game is “a wonder to behold as we unite legends of a bygone era to award big wins through this immersive new slot.”

Ms. Purvis goes on that “with four bonus rounds available and the inclusion of the Jackpot King Deluxe pot adding an extra layer of excitement to every spin, Wonder of Ages is set to become a stellar addition to our ever-expanding portfolio of games.”

Exciting news never stop coming from Blueprint. Earlier this month, the company, which is part of German gambling group Gauselmann, announced the launch of its third-party developer program for independent game development studios.

The program aims to help indie studios popularize their content by integrating it into Blueprint’s RGS platform. The new initiative will also provide game developers with the platform they need to showcase their marketing tools and other innovations, as well, and gain access to a wide network of operators.