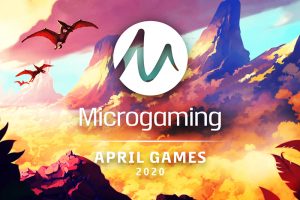 Microgaming has just revealed the April lineup of new slots titles that have been created by its network of independent game development studios and third-party content partners.

The new games feature exciting visuals and sounds as well as in-game featureс that aim to provide all sorts of slots enthusiasts with unique experience.

Anderthals is the first new game that is set to be rolled out this month. The title was crafted by Just For The Win exclusively for Microgaming. The five-reel, 40-payline game is set to be launched on April 7.

Anderthals features the charming cave family of Andy and Annie Anderthal who will take players to a fiery journey back to the dawn of civilization. The game is packed with features that complement its quick pace, colorful artwork, and lively soundtrack.

Anderthals’ features can be triggered randomly on every spin. The randomized feature spots can be seen directly above the grid. With these, players can unlock multipliers, expanding wild symbols, free spins, respins, and many more. The game offers win potential of up to 2,219x a player’s bet.

The Ancient Rome theme has been explored pretty thoroughly in the online slots universe, but there isn’t really such thing as too many gladiator games. Microgaming is set to present one more such game on April 21, when its Arena of Gold slot will be rolled out.

The five-reel, 25-payline title, crafted by All41 Studios, offers slots enthusiasts a glimpse into the Roman Empire and the life of gladiators. The game has an exciting selection of features, including free spins with merged reels and Golden Re-Spins which is unlocked when at least six coin symbols hit the reels.

On April 14, Microgaming will debut Diamond Force, a five-reel slot with 1,024 winways created by Crazy Tooth Studio. Players will be able to join four superheroes on their quest to protect their city. The game’s mechanics include the Team-Up Feature and the Team-Up Bonus Spins.

The Vault will be the final April release to join Microgaming’s portfolio of games. The new title is set to be launched on April 28. It was developed by Snowborn Games.

The Vault features five reels and 20 paylines. The game stars Jewel, a devious burglar who carries out a heist in an elegant Parisian gallery. The game’s features include free spins and respins as well as expanding wilds.

In addition to the exclusive lineup of content Microgaming and its network of independent studios are set to roll out this month, the provider’s game aggregation platform will also see multiple new games from third-party content providers added in the coming weeks.

Commenting on their April releases, Microgaming Director of Global Operations James Buchanan said that this month will see the gaming provider “strengthen its content portfolio with a variety of dynamic games” that are “rich in rewarding features, stunning visuals, a range of volatility levels, and diverse characters and styles.”