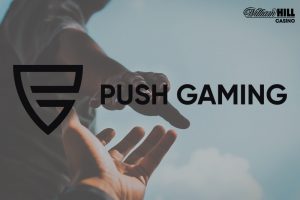 Online casino content provider Push Gaming has added a new top-tier client to its ever-growing network amid its ongoing transformation from a boutique casino games developer to a full-fledged industry supplier.

The company announced today that it has partnered up British bookmaker William Hill to provide it with its entire slots portfolio.

Popular Push Gaming titles such as Jammin’ Jars, The Shadow Order, and Razor Shark will go live with William Hill. The supplier will keep rolling out content with the operator as it releases new games in future.

The integration will be carried out via Push Gaming’s in-house gaming platform. The provider will be adding content to William Hill’s games library in the coming weeks.

This is the latest major content supply deal announced by Push Gaming in recent days. Last week, the company announced that it has partnered up with another big industry name as it looks to grow its network of clients and its presence across new and existing markets.

Push Gaming revealed last week that it has agreed to supply its content portfolio to GVC Holdings’ online gaming brands, which include Ladbrokes, Coral, and bwin, among others.

Just as with William Hill, Push Gaming’s suite of casino games will be rolled out across GVC’s brands in several phases.

Teaming Up with an Industry Titan

Of their recent partnership with William Hill, Push Gaming’s CEO, James Marshall, said that the legacy British bookmaker is “a titan of the industry and [they] are delighted to be supplying them with a selection of [their] games.”

Mr. Marshall also noted that the first batch to be added to William Hill’s existing offering will include a selection of Push Gaming’s most popular games, with more titles set to be integrated in the coming months.

The supplier’s chief added that their content has “proven to be hugely popular with players all over the world” and that they believe their games will be a big hit with William Hill’s player base, as well.

As mentioned above, Push Gaming is currently transforming its business from a boutique online casino games developer to a full-blown supplier of content for the online gambling industry that manages its own proprietary platform.

The ongoing transformation was boosted by the acquisition of Game Server Integrations (GSI), which Push Gaming announced early this year.

Thanks to the deal, Push Gaming will be able to implement its growth plans throughout the year, which include the introduction of new content as well as of platform feature innovations and in-game mechanics. All these are anticipated to hit the iGaming market in the months to come.

Push Gaming’s titles are all designed to provide an immersive and engaging, mobile-focused gaming experience. Its games are available across all devices and operating systems, including on desktop.