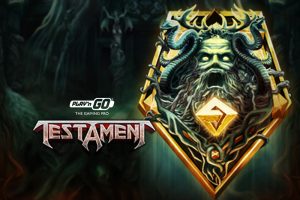 Online slots provider Play’n GO has promised an exciting 2020 roadmap and has so far delivered splendidly. But its latest slot release has arrived as one of the most daring titles in its ever-growing portfolio.

The band’s artwork is featured prominently in every aspect of the game to set an apocalyptic tone that also defines the band’s music.

Testament opens to songs from Dark Roots of Earth and into a dark hall that further enhances the apocalyptic feel of the game. Play’n GO’s newest slot starts with a 5×3 grid that expands during the game’s features. Base mode comes with 243 win ways.

A look at the table gives the same intense vibes as Testament’s whole atmosphere. The lowest paying symbols are represented by the J-A card royals. The developer has used the same font that is used on the band’s logo, which is certainly a touch that would be appreciated by Testament fans.

The higher paying symbols include a shield, a creepy looking man on a throne, a werewolf, a vampire, and a horned skull. The skull is the highest paying symbol, awarding 25 times a player’s bet for five of a kind.

It should also be noted that the skull has the ability to transform into a Wild randomly within a spin during base game. It always transforms into a Wild during special features.

A thrash metal demon acts as the game’s Wild and can substitute for all other game symbols except the Scatter. As for the Scatter, it is the Dark Roots of Earth album cover and is the symbol that triggers all of the Testament slot’s special features.

Testament is packed with three bonus features for enhanced win potential. The first feature – Song Features – is triggered when two Scatters hit the reels during base game. Once the bonus game is unlocked, players get three free spins and they can play out in three ways:

When 3 or more Scatters hit the reels, the Rise Up Spins feature is triggered and awards players nine free spins. The reels expand to 4-5-6-5-4 during this feature with nine spaces at the top of the grid being blocked off by stone blockers. Every time a Scatter lands, it smashes through a stone blocker to expand the reel even more.

Smashing all nine stone blockers unlocks the Testament Spins feature. Players are given three free spins in addition to their remaining ones from the Rise Up Spins feature. All remaining spins combine all of the powers of the Song Features for the ultimate thrill.

Commenting on their latest slot release, Play’n GO Chief Product Officer Martin Zettergren said that “creating a slot based on a band or artist carries an extra weight to its” as “you have to create a fun, unique slot for players to enjoy, byt also represent the band and their music to fans accurately.”