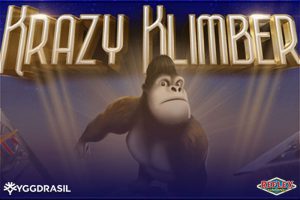 If you’re still on board the hype train powered by the recent release of Godzilla vs. Kong, the latest MonsterVerse movie, then Yggdrasil and its partner Reflex Gaming may have just rolled out a little something for you.

In their latest collaboration, Krazy Klimber, the online casino content supplier and its studio partner challenge online slots players to battle a giant ape on top of a sky-high tower.

Krazy Klimber is a 5×3, 20-payline online slot that places the above-mentioned giant beast as a focal point of its story as it looks to scale the tower in search of massive wins.

This new title is the latest release from iGaming developer Reflex Gaming as part of Yggdrasil’s YG Masters program, and follows the roll-out of Desperate Dawgs earlier this year. The earlier game more than exceeded expectations with gambling powerhouse William Hill reporting that it ranks among its top three most successful launches of 2021.

Reflex Gaming joined YG Masters in the spring of 2020. Its membership in the program secured the studio with access to Yggdrasil’s GATI standardization technology as its go-to market interface to ramp up its global expansion strategy.

Reflex Gaming was formed in 2004 and has been widely regarded in the gambling industry as the largest indie supplier of gaming machines in the UK. It is also the largest major online casino content maker to be part of the YG Masters family.

Krazy Klimber comes with two major features which can be triggered on any spin. The Krazy Klimber bonus game is activated when the bonus symbol lands on reels 1, 3, and 5, with the Ape character scaling the skyscraper. During the bonus game, different levels offer different rewards, including a multiplier win of the player’s stake or free spins.

In this special mode, players can land a monster max win of up to 1,000x their stake.

If the free spins feature is triggered during the Ape’s climb towards the top of the tower, players are awarded up to three super sliding wilds that can move between reels for big wins on every spin.

Commenting on the latest game released in partnership with Reflex Gaming, Yggdrasil Head of Product and Programs Stuart McCarthy said that Krazy Klimber is another action-packed online slot added to their YG Masters portfolio and that with an instantly recognizable theme and huge win potential, they cannot wait to see how the game will be received by players across their network of operator partners.

Reflex Gaming Chief Product Officer Mat Ingram added that they are thrilled to roll out their new online slot through the YG Masters program as it has been one of their strongest games on their land-based gaming machine estates.

Mr. Ingram went on that “from the toe-tapping rhythms of the jazz soundtrack to the buzz of circling bi-planes and search lights sweeping across the Manhattan nightscape; we’re looking forward to seeing players scale new heights of entertainment and excitement with our ape in search of big wins.”